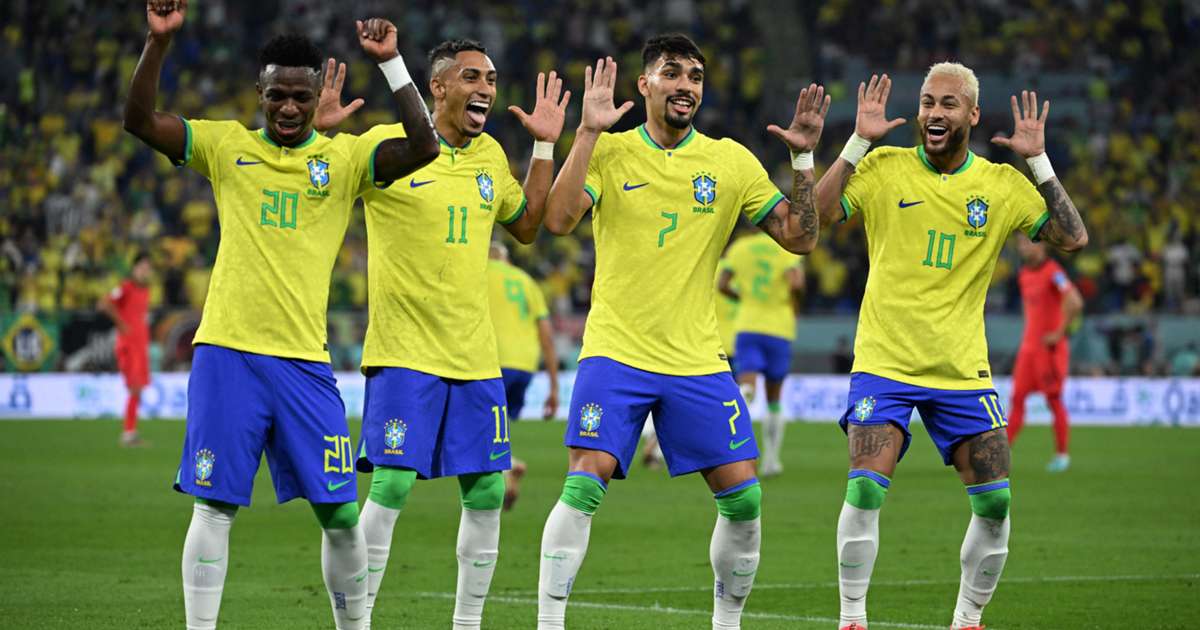 Brazil players danced after each goal against South Korea and Tite says they will keep celebrating with passion despite criticism.
FotMob - 2 months ago

Brazil head coach Tite insists the Selecao will continue dancing during goal celebrations because it is part of their "culture" as he dismissed the suggestion they are showing disrespect.

Croatia await Brazil in the World Cup quarter-finals after Tite's side beat South Korea 4-1, a victory that saw them exhibit some of the best football on display at Qatar 2022.

Brazil players celebrated each goal by dancing, and Tite even joined in for the celebration after Richarlison made it 3-0.

The coach mimicked Richarlison's trademark pigeon dance after the Tottenham forward came over to the Brazil dugout.

Some pundits criticised Brazil for their celebrations, suggesting they were showing disregard for their opponents, but this is not an opinion Tite will accept.

For him, such criticism essentially reflects ignorance of Brazil and its culture.

"This is not my team, this is the Brazil team and I have the responsibility of being head coach," Tite told reporters in Thursday's pre-match press conference.

"I am very sorry, but I won't make comments about people who do not know Brazilian football history, Brazilian culture, the way each one of us is.

"So, to those I leave that noise aside. I want my connection to be to my job, to people I relate to, to those who relate to my work, who know how much I respect and know my history.

"Those are the ones I give my heart and attention to. I am very discrete. I will continue to be so, because I respect the culture and the way I am, and this national team I play with.

"Having said this in terms of education we will definitely be identifying with [young people] and lots of other kids who will dance because that's our culture when we score, and it's not being disrespectful to anyone.

"That's how we do things, that's us in terms of culture, but we also help the education of these kids in school and we will continue doing things in our manner."

He added: "Once again, the Brazilian football identity is not me, it started a long time ago with desperate communities training boys who could produce good football. Even with all the risks it entails.

"I know we face criticism but that's the football I believe in, even if we face challenges and criticisms for not winning the World Cup, we keep moving forwards. That's what we believe in."

The topic of Brazil's dancing and celebrations was frequently brought up during Tite's briefing, with it seemingly the main takeaway for many after the win over South Korea.

While Tite was clearly frustrated by the perception of Brazil being disrespectful, he delved deeper into the issue as he claimed his involvement in the Richarlison celebration showed how engaged he is with young people.

"I think it's a connection I have with younger generation," he continued. "I am 61 and I work with players who are 21, 22 years old. They could be my grandkids.

"I have a connection with them, all those who truly know me. If I have to choose between those who know me and those who don't know me, I choose those who I do know, of course.

"And if I have to dance to connect with them, we will continue dancing. I also use a metaphor; when we paint a painting, the entire painting is the athletes. They are the ones who are portrayed.